THE ULTIMATE GUIDE TO SIGNET RINGS 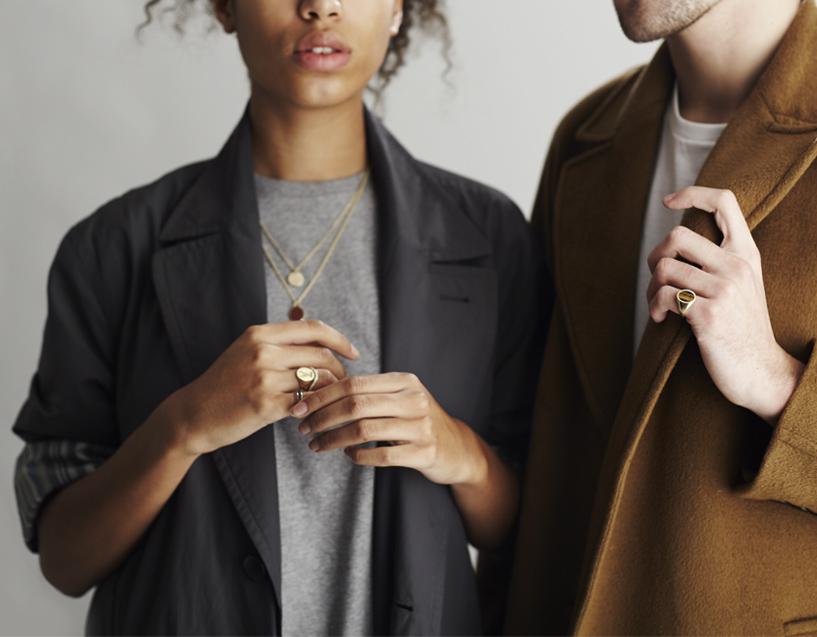 Known as the ‘gentleman’s ring’, the signet ring is traditionally seen as a symbol of family heritage. However, it has been around longer than heraldry. For many centuries, the signet ring bore the family crest or coat of arms - see our Alternative Guide to Engraving for other ideas – engraved in reverse so that it could be pressed into soft clay or wax and used as a seal on a document.

Sealing in this way was official, authentic and could not be forged. It was seen as a form of identification. Because of this, signet rings are often referred to as ‘seal rings’. The name comes from the Latin ‘Signum’ which means ‘sign’.

Now, signet rings are worn by men and women from all walks of life who wish to exhibit style, or a sentimental connection with something or someone.

The History of the Signet Ring

Seals were used in the earliest civilizations. In ancient Mesopotamia, engraved cylindrical seals made of stone were used to create impressions in clay. Worn by Pharaohs, primitive stone and faience (pottery), rings have been found dating back to Ancient Egypt, bearing the names of gods in hieroglyphics.

It was not until the Late Bronze Age (2300 BC) that signet rings started to take the form we recognize today. By the Hellenistic Period (from 323 BC), they started to be worn more for aesthetic purposes; King Mithridates VI of Turkey (born 120 BC), a man clearly after our own heart, was known to have an impressive collection of signets.

By the middle ages (from the 5th to 15th century), the introduction of sealing wax meant signet rings transitioned from being made with a raised carving, to intaglio, which meant their design was sunken. This would leave an impression in the wax more effectively.

Wax seals were often used to authenticate a document and were commonplace in most royal chanceries (medieval writing offices) by the end of the 10th Century. Almost every person of nobility wore a signet ring engraved with their family’s crest or coat of arms. Over time, sealing in wax gradually became less elitist and by the middle of the 13th century, freemen adopted the practice.

Signet rings became popular with the rise of the bourgeoisie. In the absence of a coat of arms, the middle classes used a signet ring to denote sophistication.

The 17th century saw signet rings fall out of favour and the higher echelons of society would wear their seal in an ornamental mount, on a chain as a fob instead. This was a common method until the 18th century when signet rings rose into fashion once more.

The very wealthy could afford a precious stone on the bezel of the ring - see What Makes a Signet Ring, below - (view Rebus’ full collection here). The most common stones used in the 18th century were ruby, amethyst, garnet, chrysoprase, bloodstone, cornelian, and chalcedony. Rings were most commonly made from gold, until later in the 19th century when platinum became popular.

Throughout history, the signet ring has been passed down as a family heirloom. Most titled aristocrats had their family crest or coat of arms on the bezel; William Cavendish, the sixth Duke of Devonshire (born 1790) wore a light green chrysoprase signet, carved with the Devonshire crest over the initial D, with the garland of the Order of the Garter when he was granted dukedom.

By the end of the 19th century, men of all classes had started to wear signet rings, with merchants often choosing monograms on their rings.

Today, the elitism associated with signet rings is falling away. Some people still choose to have their family crests engraved on their rings, but others decide to be more creative. See our Alternative Guide to Engraving for more information. Some people choose to wear them every day, whereas others only put them on for special occasions. They are often given as 21st birthday presents, or are worn as wedding rings.

Signet rings can also denote membership to a club. Even today, Freemasons sometimes use signet rings to identify themselves and military men wear signets to reflect rank or status. They are also worn by people who have the right to bear arms.

The popularity of signet rings continues to increase. The image of the signet ring has been boosted by positive portrayals in popular culture, such as in Tom Ford’s wildly successful film A Single Man, in which the stylish main character, played by Colin Firth, wears one with aplomb.

What Makes A Signet Ring?

Signet rings have a flat bezel (the surface which bares your engraving – see the ‘shop’ section on our website to pick your style. A design is usually engraved in intaglio (meaning it will leave a raised impression of the design if the ring is pressed into sealing wax). As you can see in our Alternative Guide, the design is often engraved as a mirror image to ensure it appears the correct way around when stamped, discover more in our Q&A with master Rebus craftsmen. -How to choose the shape of your ring

Here are some popular signet ring shapes - see our shop by style section for more information:

Oxford Oval - perhaps the most popular and traditional shape for signet rings.

Round - thought to be more contemporary than the traditional oval.

Cushion – a soft, square-shaped ring, a favourite during the Victorian era.

Find out more about size and shape here: http://www.rebussignetrings.co.uk/media/wysiwyg/FaceSizesWeb.pdf

-How do I choose a stone for my ring?

Rebus offers a variety of stones to have set in your ring. We can accommodate for any preference, but here are some finer details on more popular options:

Tigers Eye – a golden/red-brown chatoyant gemstone displaying an almost silky appearance due to the parallel growth of rutile quartz crystals.

Onyx – a type of quartz, commonly seen in black.

Sardonyx – a type of agate layered with sard. When engraved, the detail is particularly pronounced due to the different coloured layer beneath.

Cornelian aka Carnelian – a reddy/brown agate.

Bloodstone – a green variety of jasper with red flecks of hematite. -What precious metal should I choose?

Rebus handcraft their signet rings from solid sterling silver, 9ct, 14ct and 18ct gold (in yellow, white and rose gold) and in platinum.

Gold is a traditional choice for a signet ring and its appeal as a precious metal dates back to 600 BC, when it was first used in coin form. Gold artifacts have been found dating back to 4th millennium BC, representing wealth, wisdom, and longevity.

Pure gold is too soft to make into a ring, so it is always mixed with other metals (alloys).

The carat represents how many parts gold out of a thousand:

It is entirely up to you which you choose; the lower the carat, the paler the gold will be. The higher the gold content, the softer it becomes. 18ct gold signet rings are rich in colour and will darken with age - whatever carat you choose, it will last a lifetime.

Yellow gold – the shade depends on the gold content, as mentioned above.

White gold – yellow gold combined with metals such as palladium and silver.

Rose gold – became popular in Russia at the beginning of the 19th century and is made by adding copper to yellow gold. The shade varies depending on the amount of copper and the carat (9ct is pinker than 18ct).

Platinum – naturally greyish-white in colour and is the rarest precious metal on the planet (also one of the strongest and heaviest). Only 160 tons of platinum are mined every year, in comparison to around 165,000 tons of gold. It is also hypoallergenic.

Silver – the metal we work with least. However, many prefer it as a subtler, less expensive option. Despite this, it has been valued for centuries as a precious metal and was once seen as more valuable than gold.

How to Wear Signet Rings

Traditionally, the signet ring was worn on the small ‘pinkie’ finger of the non dominant hand. This was so the ring could fulfil its primary purpose efficiently, which was to emboss or seal a document. This started in ancient Egypt and was carried on by the Romans. Men today often wear signet rings on their left little finger.

However, there are no hard and fast rules. Fashion and tradition has relaxed in all areas of style. Some wear their ring on their third ‘ring’ finger, like Prince Charles – see the ‘famous wearers’ section below and some on their middle finger. Who Has Worn Them?

-Prince Charles wears one adorned with the fleur-de-lis alongside his wedding ring.

-Steve McQueen was rarely seen without a gold square signet on his ring finger.

-Sir Winston Churchill wore a signet ring with his family crest on his third finger.

-Henrietta Queen of France, who died in 1669, wore a diamond signet ring with the coat of arms of her husband King Charles I.

-The Pope has worn a signet ring called the Ring of The Fisherman or the ‘Piscatory Ring’ since around 1265, with an engraving which represents Saint Peter.

-The study of seals (not the animal, mind) is known as sigillography or sphragistics.

-When a Pope dies, his signet ring is ceremonially destroyed by hammering in two lines in the shape of the cross.

-When depicting the story of Daniel and the Lions’ Den, The Old Testament makes reference to signet rings: ‘And a stone was brought, and laid upon the mouth of the den; and the king sealed it with his own signet, and with the signet of his lords; that the purpose might not be changed concerning Daniel’ - Daniel 6:17.

-There is a signet ring preserved in the British Museum in London which is inscribed with the name and position of an Egyptian priestly official.