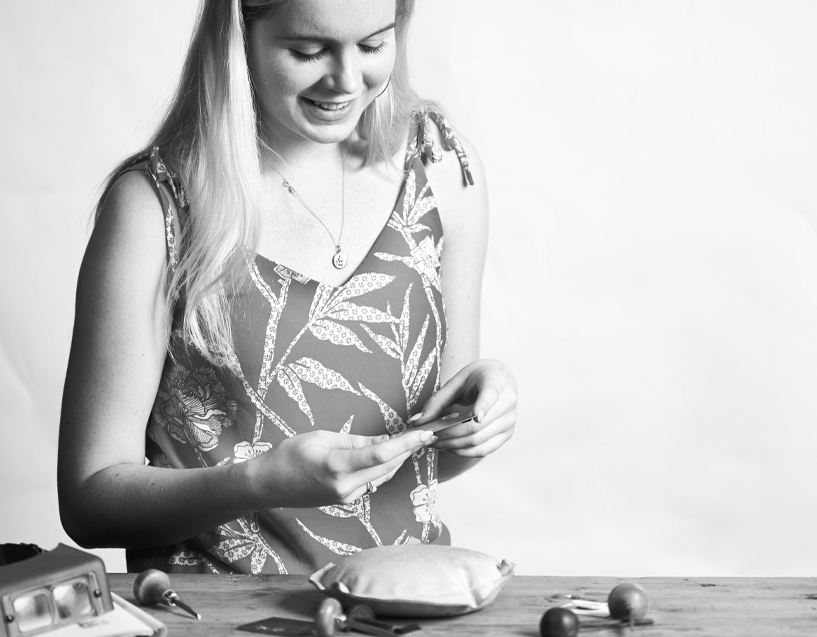 Twenty-year-old British Academy of Jewellery student Megan is an engraving apprentice at Rebus.  Taking us behind the scenes of her five-year apprenticeship, she reveals how she’s already making waves with a prestigious award from the so-called Oscars of Jewellery, and how she’s learning to get things right and focus on the improvements, not the frustrations...

How would you describe what you do?

What is it about the job that most appeals to you?

For me, the most satisfying part of the job is spending a long time on a seal engraving, taking the wax impression at the end, and seeing how well it has turned out.  I get a great sense of achievement every time I make an improvement in my work.

What have you had to learn and how long did it take you to train?

I’m undergoing a five-year apprenticeship – of which I have completed two years.  At first I learned the basics of surface engraving, but most of my apprenticeship has since been focused on seal engraving.

There is still so much for me to learn and lots of practice needed, but I recently won an award from the Goldsmiths’ Craft & Design Council for junior engraving which was an amazing honour.

The piece titled Whale in Space, was a copper engraving detailing marine life swimming in a galaxy of stars.

What is the most frustrating part of the job?

I can be very hard on myself and sometimes I get frustrated when engravings don’t go as well as I want, or I’m not improving as fast as I’d like to.

What would people be most surprised to know about your job?

People are always surprised when they see how much detail we’re able to get into with such small seal engravings.

What’s the best advice you’ve ever been given?

The best advice has been to take my time and not be too hard on myself – I’m still in the middle of my apprenticeship and have many years to learn everything I need to!