I bought it at Christie’s

Collector and author Michael Estorick on his signet ring with a Roman-engraved stone and a 13th-century inscription, unearthed in the north of England in 1760

‘I love signet rings. I’m interested in all forms of mark-making — calligraphy, drawing, writing fiction. I think life is all about making your mark.

‘I bought this ring around the time I started collecting. It was 1977, and I had just been given an advance on a book, so I went off and spent all of it on this one object. Soon after, someone found a reference to the ring in the journal of the Society of Antiquaries. It seems to have been dug up in Yorkshire, England, in 1760. I imagine it fell off someone’s finger, or perhaps it was deliberately buried.

‘The stone is a carnelian, and the carving is first-century Roman. The intaglio may seem tiny, but it is not small by the standards of Roman engraving. The figure with the horse is probably Castor.

‘A crusader may have brought the stone back to England from the East. In the 13th century, it was set in the ring — perhaps in York, where there were many jewellers — and the ring was given an inscription in Lombardic lettering, which was the fashion at the time. The Latin wording says something about ‘our horse’, although I have never translated it. I wear the ring sometimes — I do see the pointlessness of keeping things in boxes. 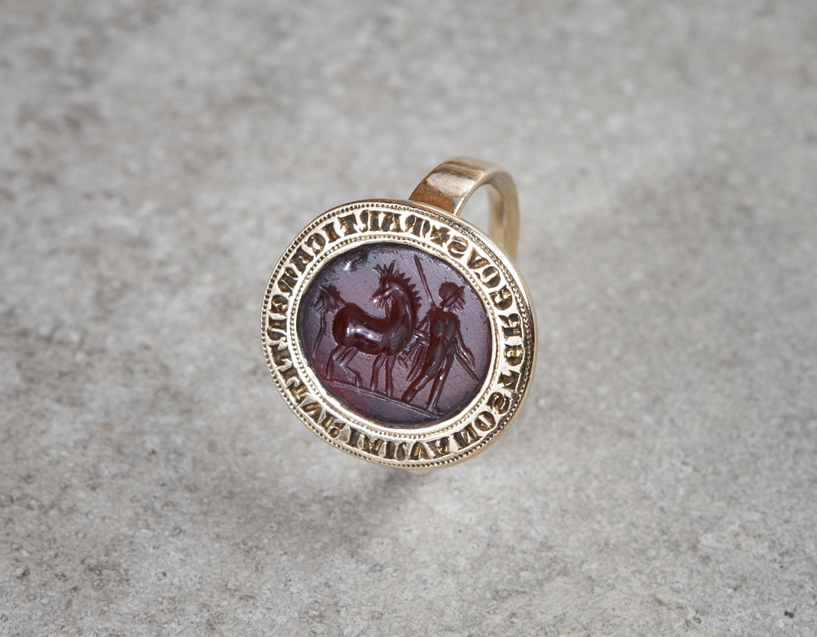 A carnelian signet ring with a Roman carving and 13th-century inscription, unearthed in 1760. Photograph by Peter Guenzel

‘When they were used for putting a seal on a document, signet rings were usually worn on the thumb. As they migrated down the hand, they became more decorative. On the Continent, people tend to wear such rings on the middle or fourth finger; in this country, they are worn on the little finger.

‘I always bid more than I want to spend, because auction rooms bring on bouts of what I call Nuremberg fever — the arm goes up. In the early days of collecting, I thought things like this would be snapped up: when you become keen on something, you imagine that everyone else is, too.

‘You need at least three collectors to make a market, so there have been times when rings were relatively cheap, and others when they have been in great demand. I once bought a ring that was the second lot after lunch. I was incredibly pleased to get it while some people were still making their way back to their seats.’

Michael Estorick is chairman of the Eric & Salome Estorick Foundation, which runs The Estorick Collection of Modern Italian Art in north London

This feature originally appeared in the November-December 2016 issue of Christie’s Interiors.